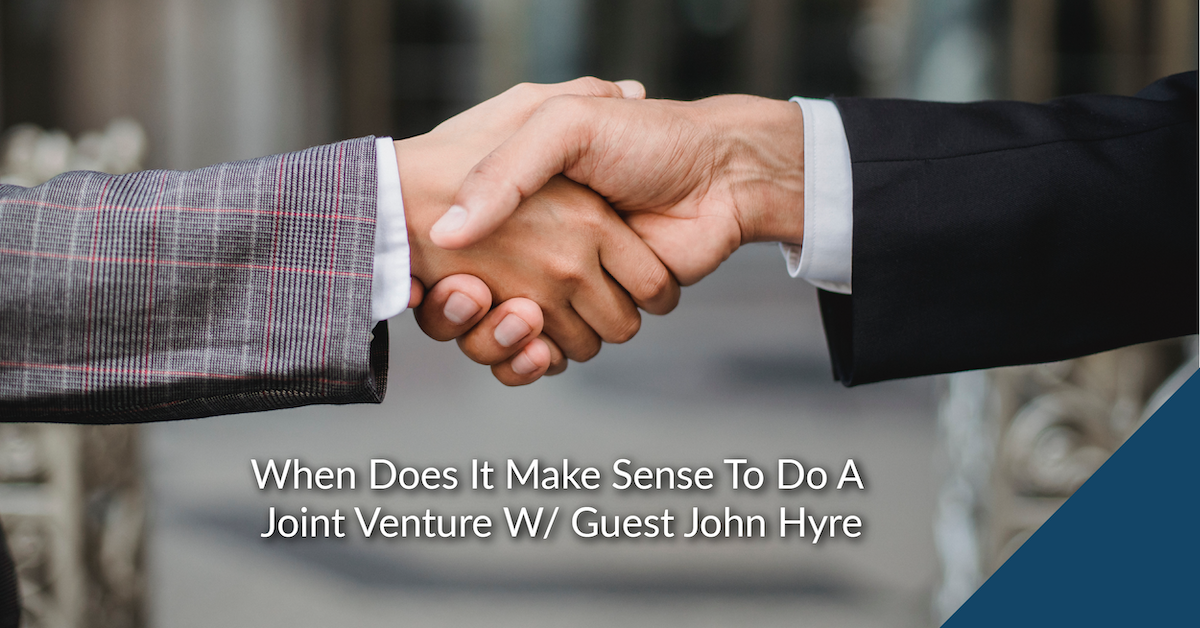 Joint ventures might be difficult for some, but not for the experts! In this 2-part guest article, tax attorney John Hyre joins me to shed light on joint ventures, when and how they work, actual case studies, and other helpful tips you should consider before entering into a JV with your Self-Directed IRA. If you have ever been curious about joint ventures and how they work, you’ll want to keep reading. Below, you’ll find part 1, which will ease you into the basics and guide you through real life examples!

Sarah: Today, I brought an expert with me. John, can you give me a little bit of your background? Who you are, how you got started?

John: I’ve been practicing tax law for 25 years. I have my own firm, and it’s really small. The good news is you deal with me, and the bad news is you deal with me. I got into self-directed IRAs right around the time Quincy did. Of course, he went in deeper initially than I… And he just started filling my brain! I mean, I knew IRA things. I had just been in my first IRA audit. I have taken SDIRA’s to Tax Court…. At that time, I wasn’t as focused on IRAs as I am now…. Ever since 2010, after I had my first audit and tax court case with self-directed IRAs, which is pretty rare experience, I’ve been much more heavily focused. Word got out. People are like, “Look, this guy’s actually been there.” From then, it’s just really snowballed to where, I would say, the practice used to be about 90% real estate. I’d say now it’s about 50% IRAs, 40% real estate, 10% other, and people can find us.

Sarah: What are some of those, real quick?

John: There are several places:  taxreductionlawyer.com, as well as taxreductionclass.com.

Sarah: I appreciate you giving me a little bit of your background. So what we’re going to be talking about today…those joint ventures. Let’s start from the basics. Tell us… what is a joint venture?

John: We’re going to have a very broad definition. I think we’re using the term joint venture in the normal human sense, not in the lawyer sense. Let me start with the less relevant definition… the lawyer sense of joint venture is really a very narrow thing where we agree for a temporary time to joint venture. Oftentimes, there’s not even a separate entity set up. We just agree to partner for liability and tax purposes. That narrow version of a JV is not always desirable. The larger version of the term, which normal humans use, is anytime you partner with someone – even if it’s in an LLC, a limited partnership, a corporation – you’re partnering, not lending. I think that’s the main distinction. You always start simple, and if the complexity pays for itself, you add complexity. But, if simple does the job, do simple. It’s cheaper and easier. Lending is simpler and easier and cheaper, but it doesn’t always get you what you want. That’s why, in some cases for example, where you want an ongoing business relationship or an ongoing share of the profits, you deal with the complexity of a JV. So, I’m going to say a joint venture is when people partner, usually through an LLC, sometimes through an LP or an LLP or sometimes just with a handshake.

Sarah: And what are your thoughts on that?

John: I don’t recommend the handshake agreements, but I’ve seen it done. It makes me nervous, but I understand why people do it. They want to cut out some of the expense and they’re comfortable with the risk.

Sarah: Now, ok, you just mentioned risk. Can you talk about some of the dangers when doing a joint venture?

John: Sure. When you’re a creditor and you’re lending, it’s simpler and cheaper. The agreements rarely need as much revision. Second, typically as a lender, you have a lien. I don’t like unsecured loans. Sometimes they make sense. Oftentimes, it’s a rip-off. I prefer secured loans. If you have security, it means that if something goes bad, you get the first shot at whatever’s left. If you’re going to do a loan, you control the process. It’s your title company. You issue the instructions to make sure that you actually have a lien. Joint venture? You typically don’t have a lien. I’ve seen some where people negotiate a lien as part of it, and that can get a little complex and ticklish, but it’s not impossible. Typically, in a joint venture, you’re putting up equity, so the risk of loss is greater… but the converse is usually true. In most cases, the potential profitability of a JV is greater than the note. Now, there are always exceptions.

Sarah: So then, what’s the upside?

John: Well, there’s always a trade-off. That’s life. Nothing’s ever perfect. The operating agreement is more complex, but you can put almost anything in it. I mean, you can put some crazy things in terms of interest or depreciation deduction. You can say, “I get the first 20%, and then we split it 50/50, unless it’s a Thursday, in which case you have to microwave a cat and you only get 10%.” I mean, I’ve just seen some crazy stuff in operating agreements! But, as long as everyone’s an adult and has a clue, you can do that. So, the upside is flexibility. Sometimes you can structure things in a way that a note is just too rigid. A note doesn’t really let you get to that structure. It’s a trade-off.

Sarah: So, you led me into this similar question perfectly. Why would somebody choose to do a joint venture?

John: Again, the note is cheaper, safer, but less flexible. I’ll give you an example. The problem with a shared appreciation mortgage is that once someone pays off my principal, I stop participating in the profit. Let’s say they have an insanely profitable deal, and let’s even say that I drafted it. So, I get half the deal, 50% shared appreciation mortgage, but they pay off the principal. Well, now I stopped participating. That makes me sad. With a joint venture, you can have a more permanent agreement. Now, we have to be careful in an IRA. Anything the joint venture does, your IRA did. Again. Anything the joint venture does, your IRA did.

Sarah: That’s really important. I’m glad you said that. You must keep that in mind when you’re dealing with these entities.

John: With most joint ventures, what we call “pass-throughs” (the limited partnerships, the LLC, the handshake partnerships), there’s a potential for the joint venture to commit a prohibited transaction. If it does, it’s often also attributed to the IRA with negative consequences. Well, here’s the good news. The penalty with prohibited transactions, where your IRA blows up, is only if you commit the prohibited transaction. If someone else causes it, then there’s just a 15% penalty on the transaction per year, which is way less most of the time. That’s much better than your IRA going splat. Likewise, activities in a JV that would give rise to UBIT (such as borrowing) will cause UBIT in IRA or 401k owners of the JV.

Sarah: So when do you use the JV?

John: It’s when debt won’t do, when debt doesn’t get you what you want. I want to be in forever. I don’t want them paying off my principal. I want the perpetual ownership. But is that worth the cost? Because there’s the cost is dealing with people like me and there’s just more complexity in an operating agreement when compared to a loan. If there’s enough money on the table, it often is worth it.