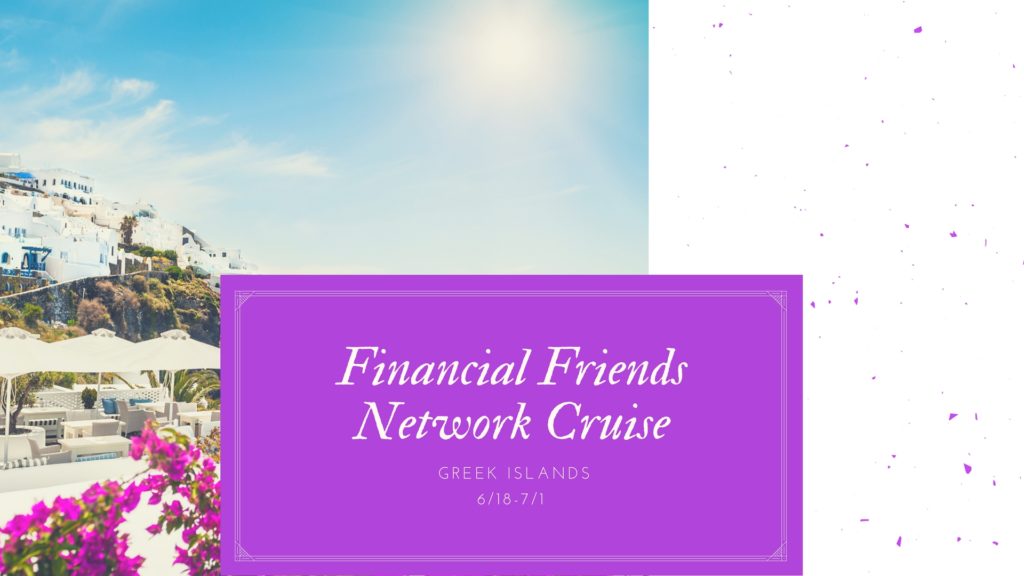 For more information go to http://www.financialfriendsnetwork.com/schedules/

Day 01 Mon. Jun. 18, 2018: USA
Today we depart for our overnight flight to Athens, breakfast and dinner will be served on board.

Day 02 Tue. Jun. 19: ATHENS
After we have completed our passport control obligations, we will be met by our Homeric Tours
representative and transfer by private, deluxe air-conditioned motor coach to our Hotel. The rest
of the day is a leisure to help adjust to the new time zone.

Day 03 Wed. Jun. 20: ATHENS
After breakfast at the hotel, we will meet our English-speaking guide and board our motor coach
to begin a half-day Athens city tour. Today, we will visit such sites as the Tomb of the Unknown
Soldier, the Royal Palace and the Pan-Athenian Stadium, the Temple of Olympian Zeus and the
world famous Acropolis and its Museum, as well as Monastiraki (the Old Flea Market), and the
modern market. We then drive along Patission, Alexandras, Vas Sofias and Panepistimiou
avenues, viewing the Academy, the University and the National Library before being transferred
back to our hotel. We will be dropped-off at a central location or taken back to the hotel, and the
rest of the day is at leisure. Perhaps take an optional excursion to Cape Sounion – see tour
description below. (B.)

Day 04 Thu. Jun. 21: ATHENS
After breakfast at the hotel, the rest of the day is at leisure. (B.)
OPTIONAL: CAPE SOUNION:
We begin by driving along the coastal road past the wonderful beaches of Glyfadda, Vouliagmeni,
Varkiza and countless coves, and splendid views of the Saronic Gulf. A crowning feature of the
tour is Cape Sounion, dominated by the spectacular Temple of Poseidon overlooking the Aegean
Sea. We will return to our hotel in Athens after sunset with the rest of the evening at leisure.

Day 05: Fri. Jun.22: ATHENS – PIRAEUS – MYKONOS:
After breakfast at the hotel, we will be met by a Homeric Tours representative and transferred to
the pier at Piraeus to board our ship, with lunch included onboard. The first port of call will be the
island of Mykonos. Here, on this jet-set island, beautiful beaches, chic boutiques and elegant
nightclubs all vie for the tourist’s attention. Beneath its sophisticated surface, however, lies a
quintessential Greek island. Hundreds of tiny chapels dot the island and sheep graze in the
shadow of whitewashed windmills. Find a table on the waterfront and bask in the serenity of
sunset over the picturesque harbor. Be sure to send your regards to Pete the Pelican. On
Mykonos, we will disembark and be met and transferred to the superior deluxe San Marco Hotel,
with accommodations in standard sea-view rooms. The rest of the evening will be at leisure.
(B.L.)

Day 06: Sat. Jun. 23: MYKONOS:
After breakfast at the hotel, the rest of the day will be at leisure. Perhaps rent a moped or jeep
and explore the island with is fantastic views, just lie around the pool and soak up some sun, or
take the hotel’s complimentary shuttle coach to the town and do your own thing. (B.)

Day 07: Sun. Jun. 24: MYKONOS:
After breakfast at the hotel, the rest of the day will be at leisure. Perhaps an optional tour to the
island of Delos might be of interest – see tour description below: (B.)
OPTIONAL: DELOS:
Located only 3 ½ nautical miles from Mykonos by ship, in ancient times Delos was the spiritual
center of the Cycladic Islands and as the mythical birthplace of Apollo, it was considered a sacred
island. Today Delos is essentially a large archeological site, with its ruins taking up almost 1-
square mile and with no inhabitants except members of the French School of Archeology who
have been excavating the island for over 100-years. Overnight stays on the island are forbidden.
Transfer back to Mykonos the hotel for our overnight accommodations.

Day 08: Mon. Jun 25: MYKONOS – CRUISING:
After breakfast at the hotel, the rest of the better part of the day will be at leisure. In the late
afternoon, we will be transferred to the pier to re-board our cruise ship for the duration of our
cruise to the Greek Islands and Turkey. (B.D.)

Day 09: Tue. Jun. 26: KUSADASI (EPHESUS) – PATMOS:
After breakfast, we will arrive into Kusadasi. Your INCLUDED tour of nearby Ephesus should not
be missed, for here, history truly comes to life. Walking towards the ancient harbor, down a
marble road rutted by the wheels of countless chariots, you pass architectural masterpieces like
the Magnesia Gate and the Library of Celsus before arriving at the Great Amphitheater where St.
Paul was arrested and cast out of the city. We can continue on to the House of the Virgin Mary,
where she spent the last years of her life after the crucifixion of her Son.
This afternoon, we will arrive on the island of Patmos. This serene island is known as the site of
the apocalyptic revelations of St. John the Divine, written here during his exile from the Roman
Empire your INCLUDED excursion allows one to see everything that the island has to offer. The
cave where he is said to have lived is now the site of the Monastery of the Apocalypse. In the
11th century, the Abbot Christodoulos founded the Monastery of St. John on one of the island’s
highest points. Here, priceless icons and manuscripts are on display for all to see. (B.L.D.)

Day 10: Wed. Jun. 27: RHODES:
After breakfast, Your INCLUDED shore excursion offers you the to visit the beautiful ‘Island of
Roses’ with its rich and varied history. On a hill above the charming town of Lindos, rises an
ancient acropolis dedicated to the goddess Athena. Below, lay the Bay of St. Paul, where the
apostle landed during his voyages. The crusading Knights of St. John left the magnificent
medieval city of Rhodes behind when Sultan Suleyman the Magnificent defeated them in battle.
The Turks then occupied the island for almost 400-years, leaving mosques, minarets and a
Turkish bath to mark their presence. Lunch is included onboard the ship, or you can take
advantage of one of the many local tavernas and sample the local cuisine. Return to the ship in
the early evening and sail though the night. (B.L.D.)
Rhodes Mykonos
Santorini

Day 11: Thu, Jun 28: CRETE (HERAKLION) – SANTORINI:
Good morning, and welcome to Crete. After breakfast, visit Heraklion, the capitol of Crete and its
principal commercial port. Your INCLUDED shore excursion just 3-miles away are the fantastic
ruins of the Palace of Knossos. Discovered in 1899 by Sir Arthur Evans and partially
reconstructed, the elaborate Palace is believed to be the mythical Labyrinth of King Minos and
the seat of ancient Minoan culture, after return to the ship for lunch..
This afternoon, we will sail to the island of Santorini, perhaps the most breathtaking of all Greek
islands. Around 1,500-B.C., a volcanic eruption destroyed the center of the island, leaving a
crescent shaped rim of cliffs around a harbor formed in the volcano’s caldera. The town of Fira,
with its whitewashed houses, narrow streets, open-air cafes and glittering boutiques, clings to
these cliffs, accessible mostly by cable car or donkey. To the south is Akrotiri, where recent
Minoan excavations support the theories that Santorini might be the fabled lost continent of
Atlantis. We will disembark and transfer to the El Greco Hotel, for the final 3-nights of our stay in
Greece. (B.L.)

Day 12: Fri, Jun. 29: SANTORINI:
After breakfast at the hotel, the rest of the day will be at
leisure. Perhaps an excursion to view the volcano and the
sunset in the picturesque village of Oia, or a winery tour,
might be interest to you. If so, please contact the hotel
concierge to arrange these tours.

Day 13: Sat. Jun. 30: SANTORINI
After breakfast the rest of the day is at leisure.

Day 14 Sun. Jul. 01: SANTORINI – ATHENS – USA
After breakfast we will transfer to the airport for our return trip.