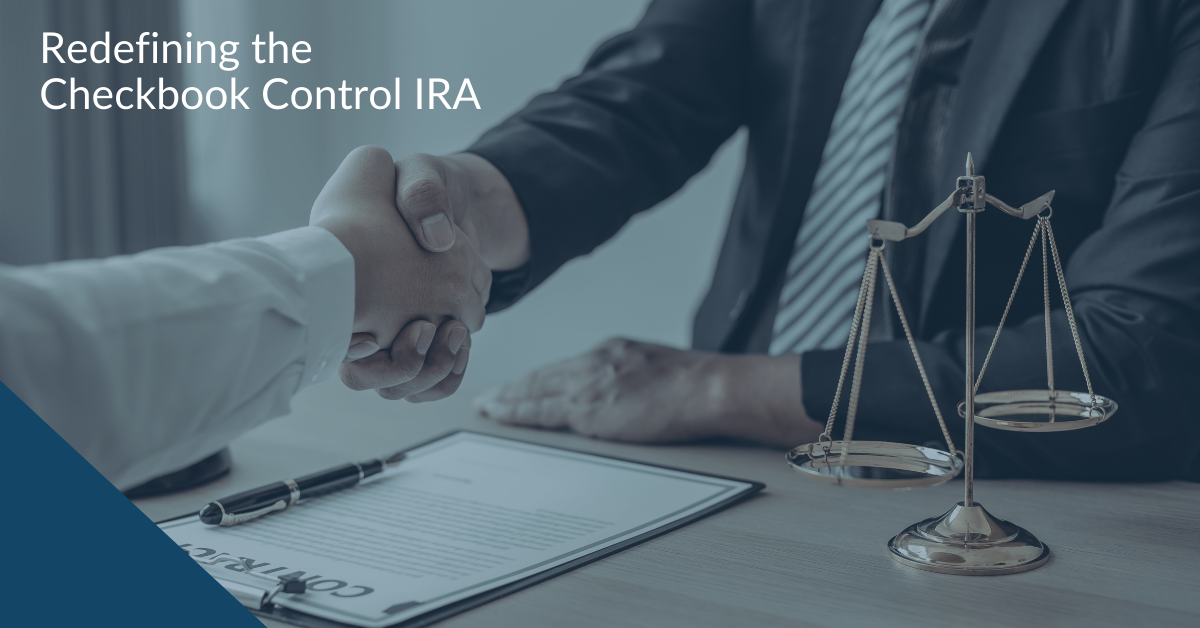 Checkbook Control IRAs can be a great tool for many investors, but their complicated nature can make them difficult to understand. If you are new to Self-Directed IRAs (SDIRAs), then we recommend you gather general information prior to this high-level SDIRA overview on how to set up separate entities, the current bills Congress is presenting, and recent court cases that have occurred.

What Does IRA Mean to the IRS

We want to be sure we are using proper verbiage, because many articles like to talk about retirement accounts from a self-directed standpoint, but never define what it means. “Self-directed” is a marketing term and does not appear anywhere in the IRS tax code (IRAs fall under IRS publication 408a). The IRS does not recognize the term and will always refer to a Self-Directed IRA as just an IRA. Therefore, for the remainder of this article will Self-Directed IRAs are referred to as simply IRAs

What is Checkbook Control

Checkbook Control is not a legal term defined by the IRS and has also been used as a marketing term for decades now. Because of this, several people have written their own articles based off their own viewpoints, causing many to think “checkbook control” is a legal term. However, just like Self-Directed IRAs, Checkbook Control IRAs can be taken several different ways. In this case, the term typically describes an IRA is setting up a separate entity (LLC or Trust) not tied to a specific self-directed custodian. That entity would be solely owned by the IRA, and the IRA owner (or any other fiduciary to the IRA) would be labeled as a manager.

What Will Change for Checkbook Control

Unfortunately, even though for decades checkbook control has been a common structure for investors, rules are changing. Over the past two years, we have seen Congress target IRAs and Checkbook Control IRAs, specifically. You can see this demonstrated in several of the proposed bills, like the “Built Back Better” plan. If you are unaware of what Congress was trying to pass, look at bill #138314, stating IRAs would no longer be able to own more than 10% of any entity, thus eliminating all Checkbook Control accounts. This was one out of an additional 7 bills almost ready to pass at the Senate level, each having the potential to majorly effect IRAs and retirement accounts.
Custodians and organizations across the nation participated in several lobbying efforts to make our voices heard. Luckily, none of these bills passed in 2021. However, this showed investors that Congress is looking deeper into IRAs and was clearly targeting them, whether directly or indirectly. Even though none of these bills passed, they are still being reviewed in 2022.

At the same time in 2021, another important event took place: a court case famously known as “McNulty vs. Commissioner”. This case reviewed custodian marketing campaigns, the ability to hold hard assets with an IRA-owned LLC (another term for checkbook control), and the consequences of prohibited transactions. The IRS determined the overall outcome of the case that the McNulty’s entered into prohibited transaction under IRS Publication 4975. A prohibited transaction applies when a disqualified individual (typically the IRA owner, their spouse, their lineal ascendants or descendants, and any companies they may have oversight on) provide services or benefits directly or indirectly to the IRA. Before 2021, several IRA custodians claimed that if you hold your own checkbook to the IRA that it was not a service. Those same custodians seem to ignore section “C”, sub-section “E” of IRS Publication 4975, which states no fiduciary can deal with the income or assets of the plan.

The case discussed if the McNulty’s had “unfettered control” to the assets that their IRA-owned LLC held. This meant they were dealing directly with the IRA-owned LLC assets. The McNulty’s primary defense for holding these assets in this manor was they read on a financial custodian website it was allowable. Direct text from the court states the IRS was “unsympathetic” to their claim. The IRS claimed the McNulty’s never sought out true legal advice and that anyone else should have been able to realize that from the website. This ultimately resulted in the IRS distributing the entire IRAs under prohibited transaction penalties and the taxation to the McNulty’s.

Owning an IRA-owned Entity while acting as Trustee

Is there a simple solution to this problem? If we know that Congress and the IRS are looking closer at our self-directed accounts, then what can we do? These questions can be terrifying as we move forward into the unknown. Luckily, H. Quincy Long, the CEO of Quest Trust Company) saw this in advance and found the answers to these questions long before the McNulty case and bills presented by Congress ever came about.

The definition of Checkbook Control is an IRA setting up a separate entity not tied to a custodian where typically, the manager/trustee in place is the fiduciary. The solution is labeling someone else your manager – someone that is a “non-disqualified” person to the IRA. Generally, this is someone who does not inherit your wealth and is not a lineal ascendant or decedent. As an example, a sibling, old business partner, or cousin could fit this description.

Usually, the first argument to this solution is that they do not want to give up their manager status, yet they fail to consider if it is worth risking their entire retirement account. Just because a custodian says you can hold your own checkbook or be your own manager, you still need to remember what the courts said in the McNulty case. The court was unsympathetic to that form of due diligence and that it should not be taken as any type of advice.

Most people want the Checkbook Control methods for many reasons, such as fewer fees at their current custodian, faster funding times, and additional levels of asset protection. All of this is still possible with the IRA-owned entity and having a manger/trustee in place, and the new definition of Checkbook Control is the IRA setting up an entity not tied to a custodian and having a non-disqualified person labeled as the manger.

It is important to do your own due diligence and, when possible, seek professional advice before making any significant decisions regarding your assets. Familiarize yourself with IRS publications (4975), court cases (McNulty Vs Commissioner), and align yourself with financial experts who have done the same. Most importantly, consider if it is worth risking your entire retirement savings for the past 10-20 years only so you can be labeled your own manager. Our knowledgeable Quest Trust specialists would be happy to speak with you further for any of your financial queries.